We are glad to announce that POETICS is participating at ICOP2022 with a presentation entitled “Terabit direct-detection optical engines and switching circuits in multi-chip modules for Data-center networks and the 5G optical fronthaul”.

The 5th POETICS Plenary meeting took place virtually on 3 May 2022.

The consortium partners connected online and discussed the project progress and the new goals to be met. 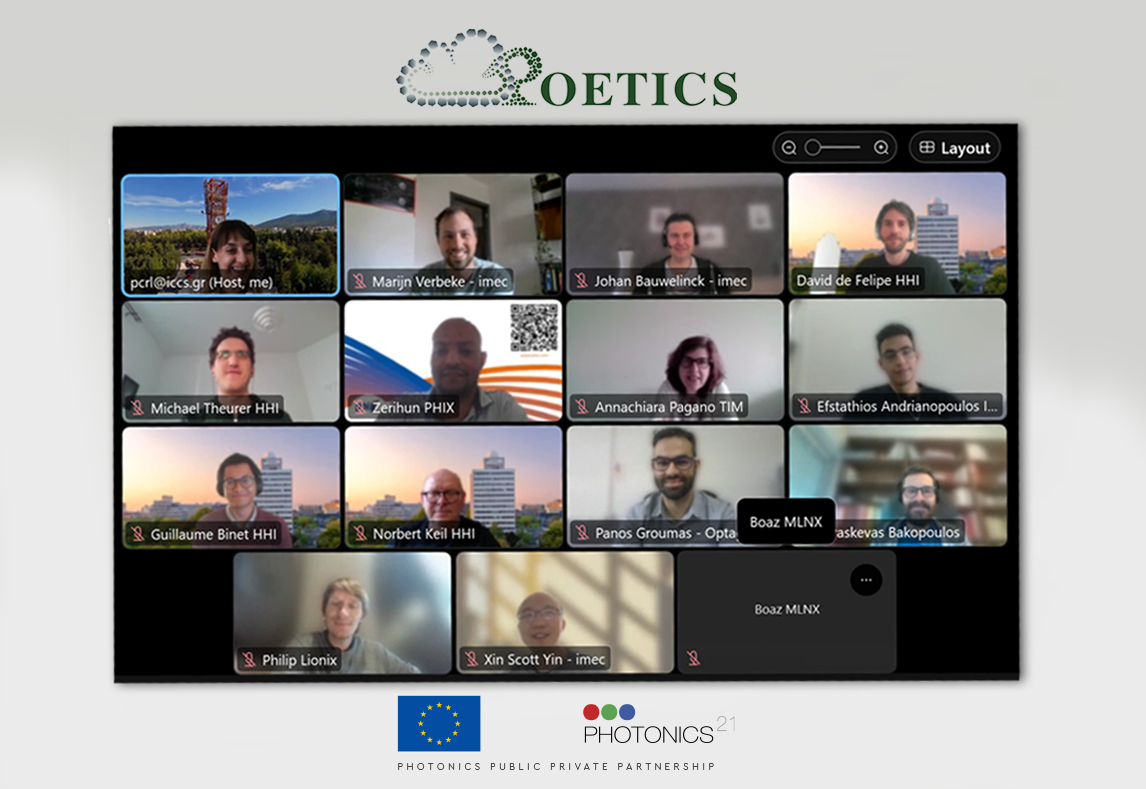 POETICS participated at OFC 2022 with a paper presentation by Fraunhofer-HHI. The paper is entitled “Uncooled 100 GBd O-Band EML for Datacom Transmitter Arrays” and it is now online on our website!

The paper successfully demonstrates the 100 GBd performance of an array-compatible O-Band InP EML in a temperature range from 30°C to 70°C. The EML chip utilizes a common active layer design, and a booster SOA increases the optical output power and equalizes it to 10 mW for all operation temperatures and it is written by Ute Troppenz, Michael Theurer, Martin Moehrle, Ariane Sigmund, Marko Gruner, and Martin Schell.

POETICS participated at Photonics West 2022 with an invited paper by imec. The presented paper entitled “Transceiver circuits for high-baudrate optical interconnects” is now online on our website!

▶️ You can also check POETICS presentation at SPIE Photonics West at  🔗 https://bit.ly/3rUcs87

POETICS project will participate at Photonics West 2022 with an invited paper by imec.

The paper is entitled “Transceiver circuits for high-baudrate optical interconnects” and the presentation will be given by Johan Bauwelinck, during Session 6: Hybrid Integrated Optical Link Modules.

We are glad to announce that POETICS project will participate at OFC 2022 with a presentation from Fraunhofer-HHI.

The presentation is entitled “Uncooled 100 GBd O-Band EML for Datacom Transmitter Arrays” and will be given by Ute Troppenz, during the session M3D. High-speed Semiconductor Lasers.

According to the article’s abstract, Benes/Clos networks constitute a particularly important part of interconnection networks and have been used in numerous areas, such as multi-processor systems, data centers and on-chip networks. They have also attracted great interest in the field of optical communications due to the increasing popularity of optical switches based on these architectures. There are numerous algorithms aimed at routing these types of networks, with varying degrees of utility. Linear algorithms, such as Sun Tsu and Opferman, were historically the first attempt to standardize the routing procedure of this types of networks. They require matrix-based calculations, which are very demanding in terms of resources and in some cases involve backtracking, which impairs their efficiency. Parallel solutions, such as Lee’s algorithm, were introduced later and provide a different answer that satisfy the requirements of high-performance networks. They are, however, extremely complex and demand even more resources. In both cases, hardware implementations reflect their algorithmic characteristics. In this paper, we attempt to design an algorithm that is simple enough to be implemented on a small field programmable gate array board while simultaneously efficient enough to be used in practical scenarios. The design itself is of a generic nature; therefore, its behavior across different sizes (8 × 8, 16 × 16, 32 × 32, 64 × 64) is examined. The platform of implementation is a medium range FPGA specifically selected to represent the average hardware prototyping device. In the end, an overview of the algorithm’s imprint on the device is presented alongside other approaches, which include both hard and soft computing techniques.

Dr. A. Leinse from LioniX (partner in POETICS) will give an invited talk at PIC International Conference 2021.

The talk will take place on Tuesday 9th November 2021 at 15:10 CET under the section PIC Manufacturing − TAP, Co-Packaging & Fab and it is entitled “Silicon nitride-based TriPleX™ modules with hybrid PIC integration”.

PIC International is part of AngelTech, which delivers a portfolio of insightful, informative, highly valued chip-level conferences. Bringing together 3 conferences, 700+ delegates, 80+ exhibitors, 120+ presentations and numerous networking opportunities, AngelTech is the number one global event covering compound semiconductor, photonic integrated circuit and sensor technologies. With a strong over-lap between the three conferences, attendees and exhibitors are exposed to the full relevant supply chains and customer and supplier bases.

➡️ You may see conference agenda at  🔗 https://bit.ly/2ZJ0tiP

Prof. Johan Bauwelinck from POETICS partner imec will give an invited workshop presentation at European Conference on Optical Communications (ECOC) 2021.  The presentation entitled “CMOS & SiGe BiCMOS Electronics for High-Baudrate Signal Generation”  will take place on Monday 13 September | 13:30 – 15:00 under the section “Are 200+ GBaud Transmission Systems Feasible? The Path to Beyond 1 Terabit/s Optical Channels – Part 1″.

➡️ You can find out more at https://bit.ly/3hgbKwC 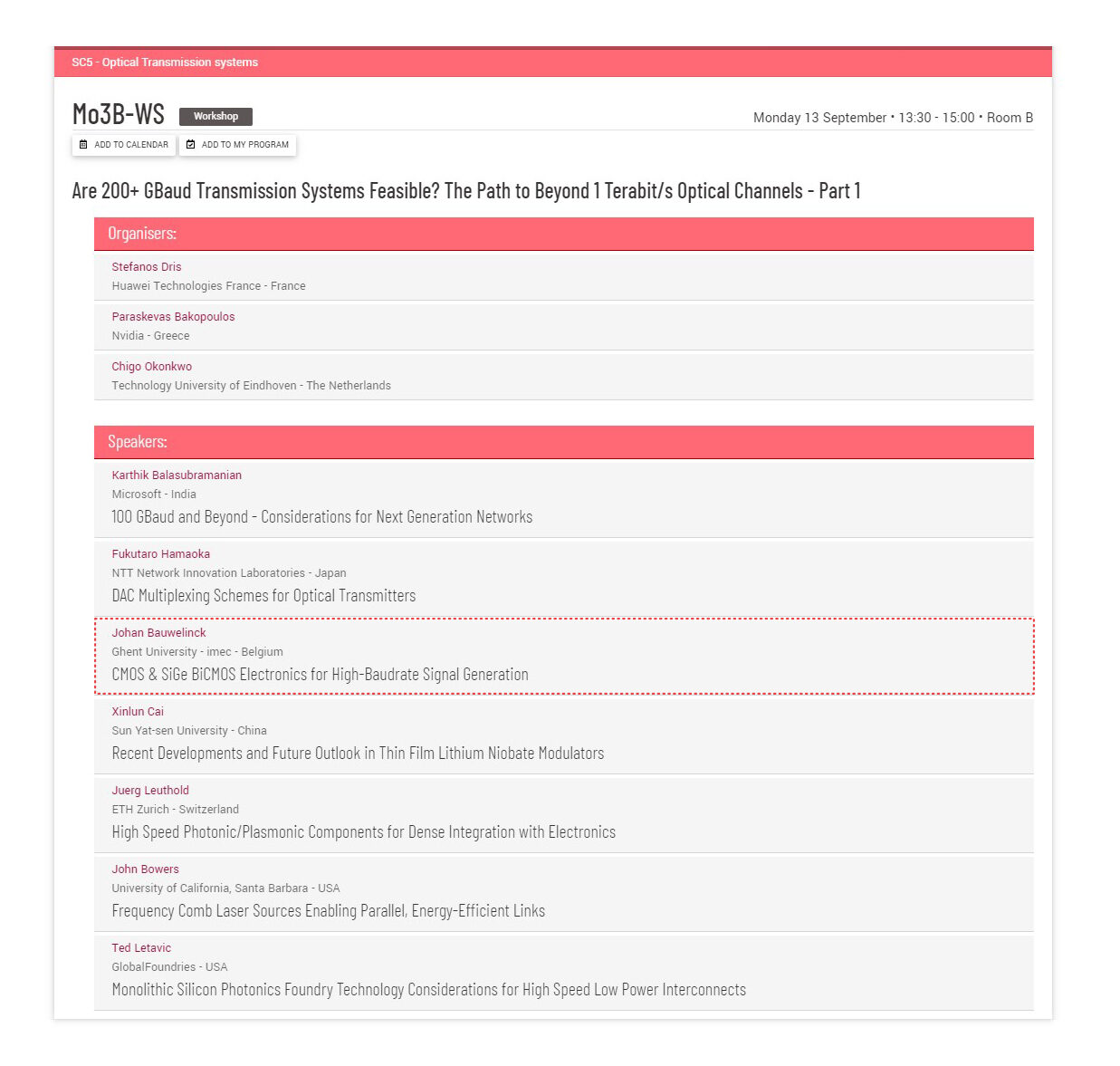 Prof. Xin Yin, from IMEC, partner of POETICS gave a presentation on “Linear Burst-Mode Receivers for DSP-Enabled Passive Optical Networks” at the OFC 2021 Conference during the ‘DSP and AI for PON Transmission’ session. The invited talk took place on June 7th, 2021.

👉You may watch and download the presentation slides at https://bit.ly/3DymhwX

This project has received funding from the European Union’s Horizon 2020 Research and Innovation Programme under G.A No 871769 and it is an initiative of the Photonics Public Private Partnership